Could YOU go Tiny??

OK, I admit it:  I haven't wanted to pay attention to the Tiny House trend....after all, as a REALTOR and a former interior designer, I pretty much crave square footage!  It probably started with childhood, since I grew up in a family of 9 and bathrooms were always at a premium in terms of sibling bargaining ("I'll iron your shirts for a week if you'll let me get in the bathroom first every morning")  Our family always lived in large, old houses - since new ones at that time were ranch style "long and lows" and we needed square footage....thus began not only my appreciation for construction quality from a bygone era, but my absolute LOVE of LARGE houses with tons of rooms! 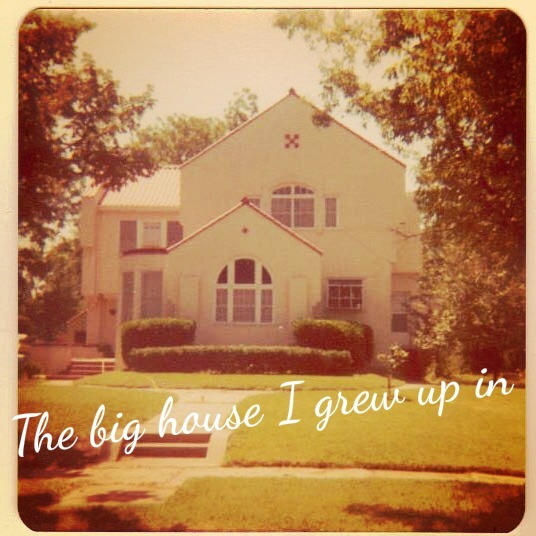 Now why, I've wondered, are so many people seriously interested in Tiny Houses??  I mean....they're SO SMALL! 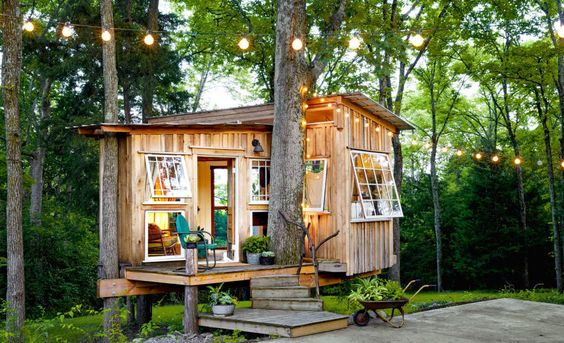 Having tried to ignore the trend....having ducked out of intense cocktail party conversations on the subject....having NEVER ONCE watched either of HGTV's tiny house shows, I was shaken out of my apathetic slumber by the Longview News Journal a couple of Sundays ago.

Yes, our local newspaper finally caught my attention with a feature story about American Tiny House, a renowned builder of the little things, based right here in the Piney Woods of East Texas!  I vaguely knew they were here - I had heard one of my own agents talking about having seen the tiny houses under construction when the doors were open one day - but somehow it finally clicked for me when I ready the story about them.....and I suddenly wanted to know more!  I needed to get to the bottom of WHY tiny houses are all the rage! 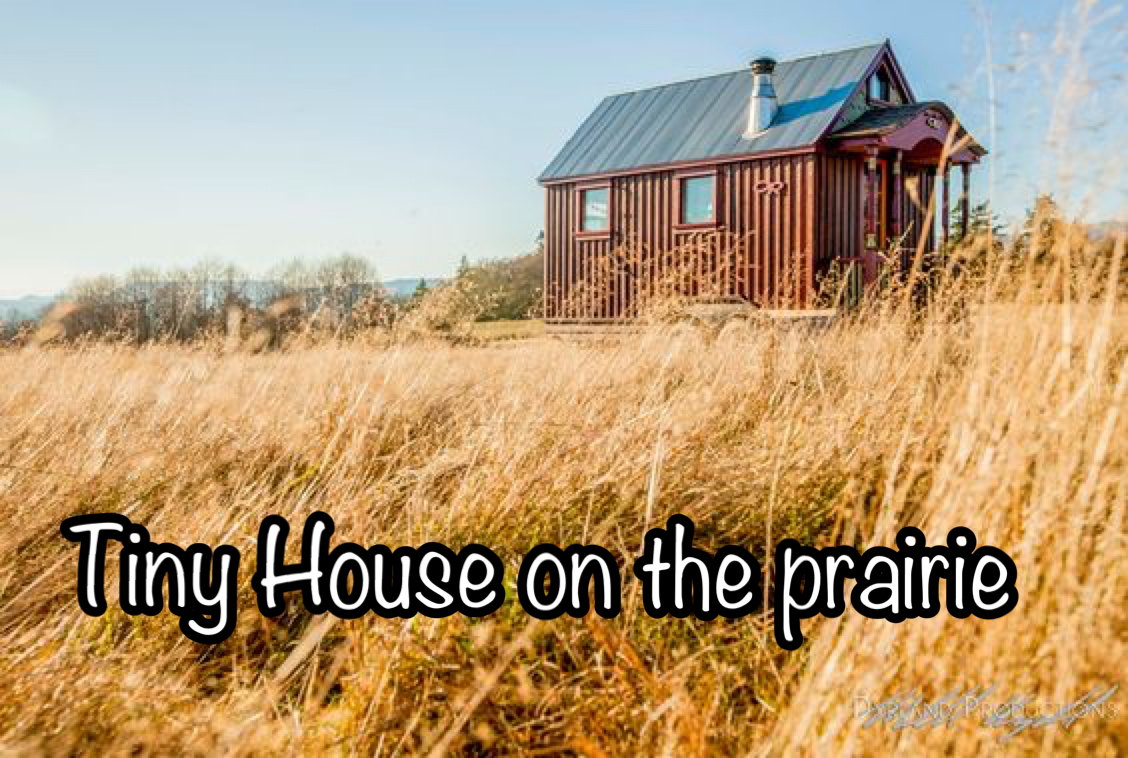 Naturally, I started with Google; I quit counting at 12 pages, and consulted the all-knowing Wikipedia for some basic facts.  First, the definition:

"The small house movement is a return to houses of less than 1,000 square feet" 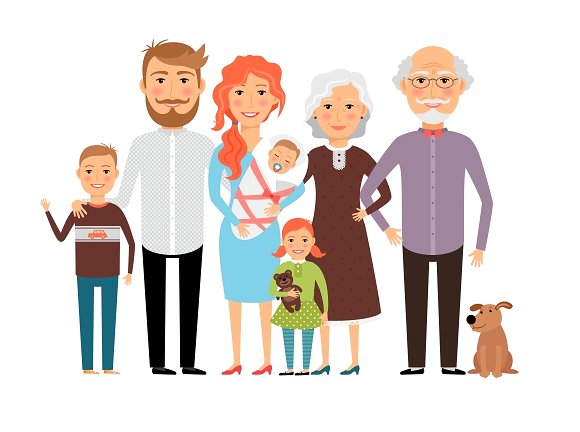 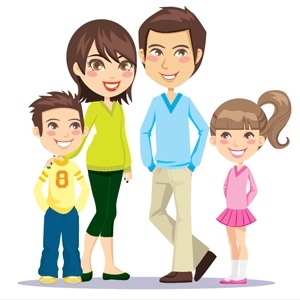 So it seems the main reason for people really considering living in a Tiny House is an attempt to simplify their lives, and to focus on what they really love doing rather than working so hard and so long just to be able to afford their house and fill it up with ever-increasing things!  I must admit, that sounds enticing....but could you really do it? 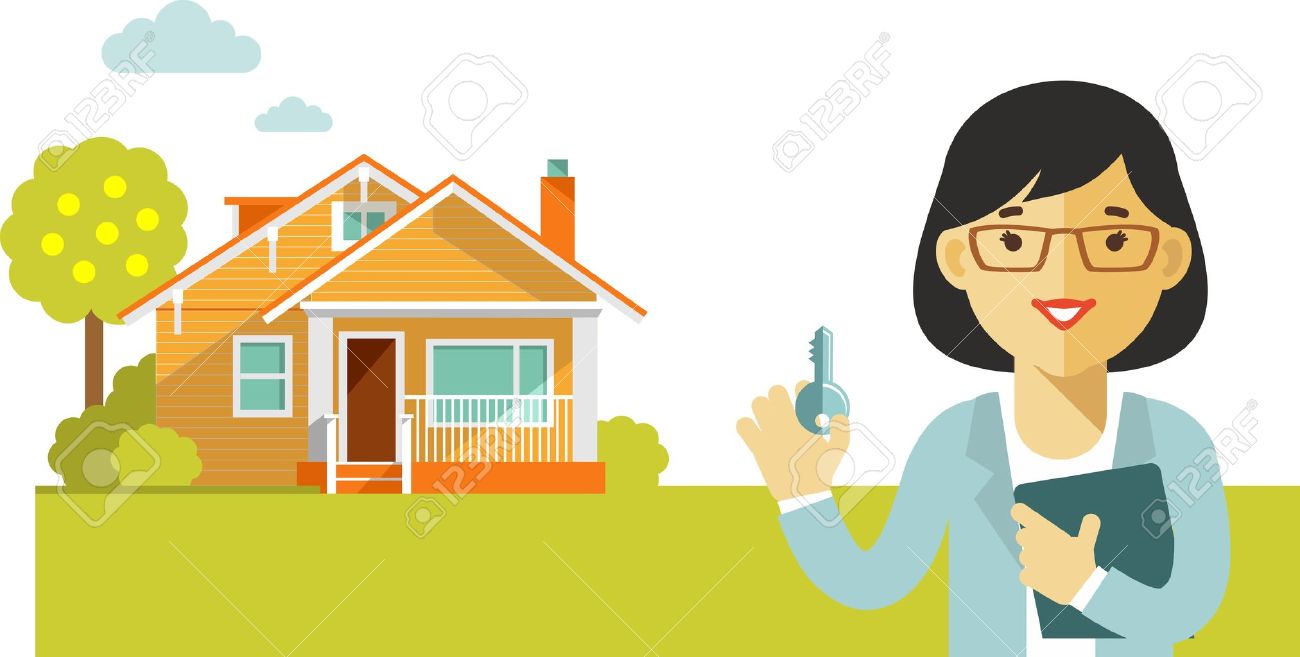 As I mentioned, I'm a REALTOR: as such I take couples through houses pretty much every day.  Though older houses often give much better ROI in terms of size, mature landscaping and location, the #1 complaint I hear has to do with the closet sizes!   If there happen to be 2 master closets, for example, the "she" always claims the larger one; if there is only one, well.....I wish I had $100 dollars for every time I heard this, "This would work for me but I don't know where you'd put YOUR clothes!" 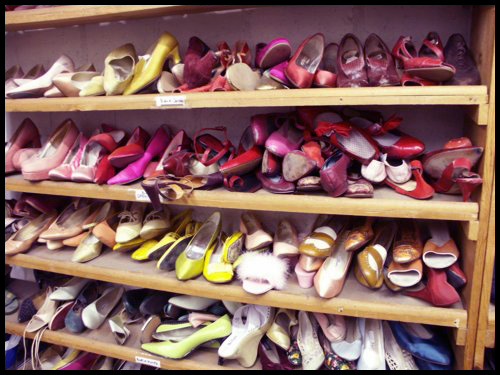 As a result, builders are now making the master closet larger than the older bedrooms themselves!  The kids' bedrooms have shunk to be sure, but closet space throughout the newer homes is gargantuan! 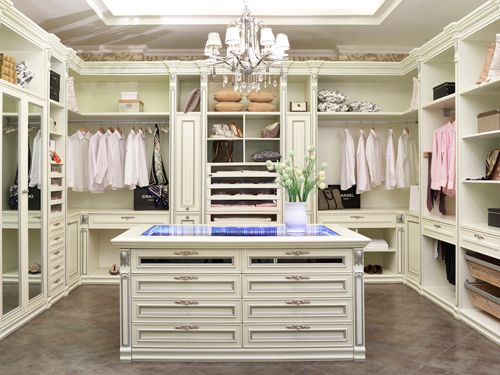 Where will you put all this stuff if you have a Tiny House?? 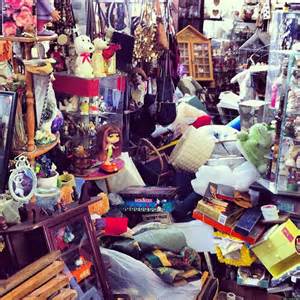 Ok, maybe that's going a little too far; obviously a real live hoarder wouldn't consider a Tiny House...especially because that would require a move!  But seriously, we are all purveyors of stuff 'n things....I rather like mine.   I like to have a wall space left when I happen upon a loved piece of art while traveling, for example.  I like to find a wonderful ceramic artist, and be able to ponder what I'll do with one more salad bowl or vase.  I suspect what I'd do (and what THEY do) is to have an increasingly large storage locker where I could just pull right up in my rolling house and stow a few things....to make room for more.  Or perhaps I'd just have an annual garage sale!  Now that could be fun!

On a slightly more serious note, I really do commend the brave souls who are experimenting with living small....I think there must be a great sense of adventure involved!  I especially love how creativity is not only encouraging fabulous design in these homes, but how it's causing people to think completely out of the box about their lifestyles - such as these 4 couples in Texas who built 4 identical Tiny Homes together in their own tiny community.....they can have their privacy, but I imagine they meet outside for barbecues, happy hour, or what used to be "chatting over the fence".  Love that - in a time when many people have no idea what their neighbors even look like, how wonderful to be able to see your best friends daily - take a look!

(Sorry, this photo has been removed)

Or consider this Tiny House hotel in Portland Oregon; at 160 sq ft it sports 2 queen beds and rents out for $125. per night.  The other "rooms" all look different - how much fun is that?  Hopefully there is a food truck court next door... 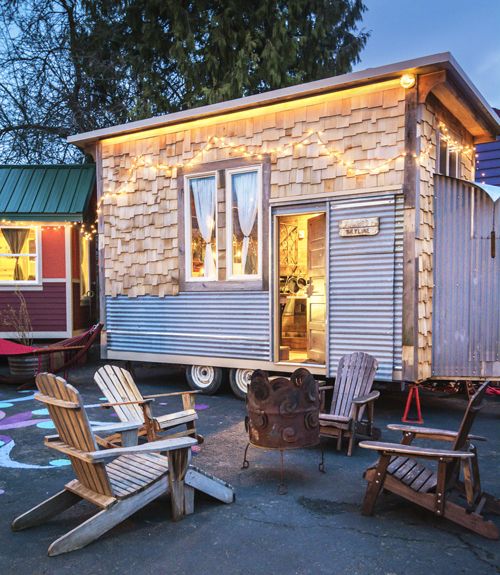 Ever had a hankering to live on a lake? 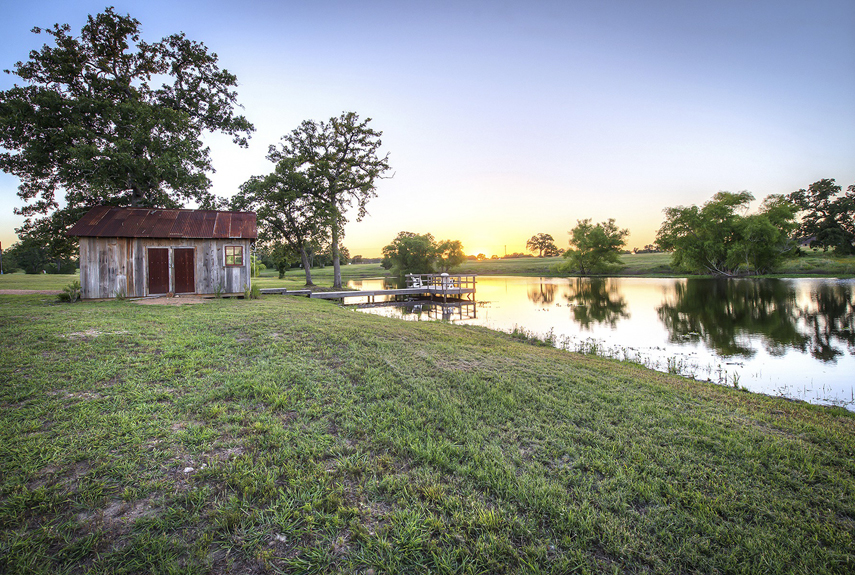 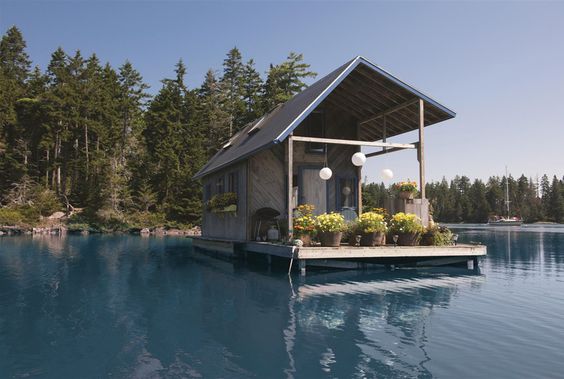 The floating Tiny House actually brings up what has become the Tiny House-lover's largest problem to date:  it just isn't that easy to find a place to put them.

The ones that are  built on a foundation must meet local building & zoning regulations, but many, if not most tiny houses are built off-site, sometimes without knowing where they will ultimately rest. That makes it difficult to know which building codes to meet, especially if owners plan to move them from place to place.

“It’s kind of the Wild West of building,” said Tony Gilchriest, a builder based in Washington, D.C. But Gilchriest notes that the lack of clear standards makes some builders more cautious. That is especially true when the owners of a tiny house plan to move it frequently, and it must be sturdy enough to be driven down the highway at 60 mph.

Many municipalities are simply outlawing Tiny Houses within the city limits, for fear of bringing down property values....and certainly with an eye towards how to regulate anything about them, including utility usage.  More often than not, at least now, builders are choosing to build the house initially on sturdy trailers, so that it can be mobile.  This is the case with our local builder, Amercan Tiny House; the owner, Andrew Pleban, says they plan the structure and exterior materials to withstand all types of weather as well as time on the road.  Obviously this adds value to owners who might've chosen an RV to travel around in, but one wonders if RV parks will begin to looks like miniature communities soon!  I think that sounds delightful! 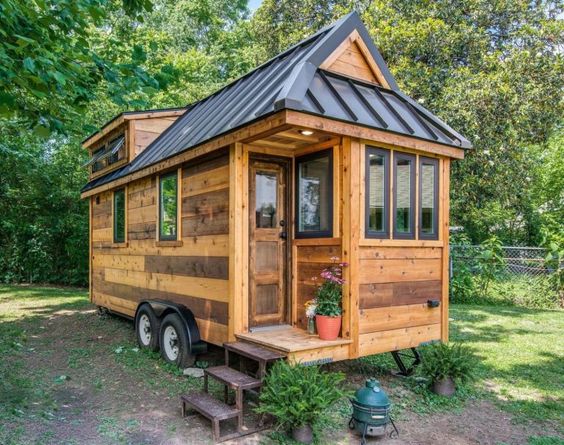 There are certainly instances where some of the larger Tiny Houses are being used to fill in small lots in urban areas, such as these: 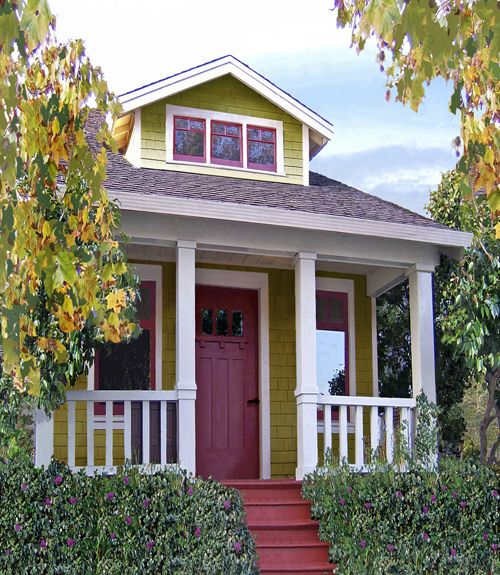 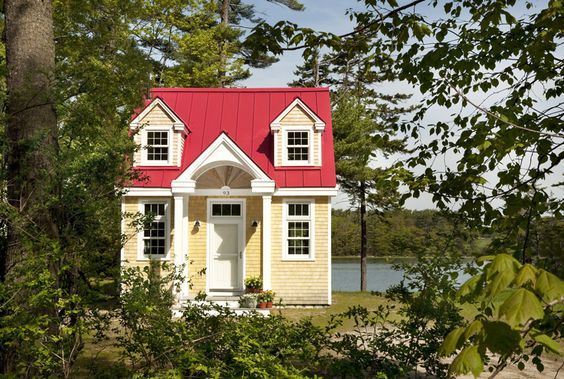 I also love some Tiny Houses I've seen that are being built with upwards of 90% recycled materials, such as these in Round Top, TX: 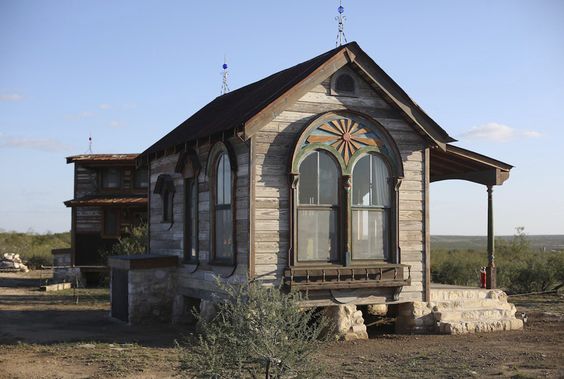 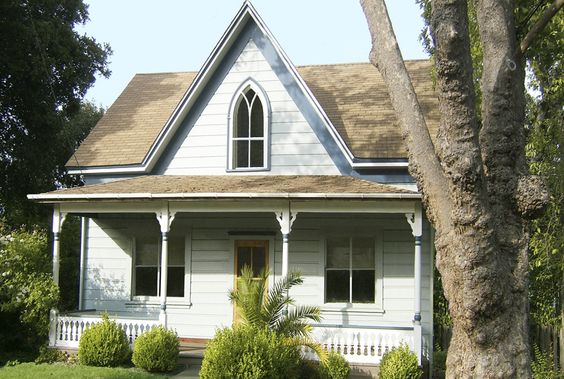 And speaking of creativity:  check out this Austin 400 sq ft home that combines 2 separate trailers, and plenty of Austin down-home style! 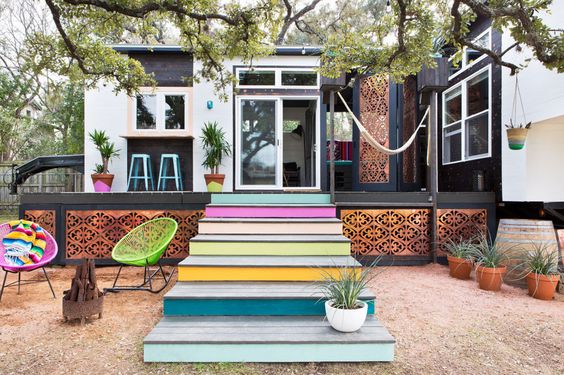 and....if you're a big fan of Moby Dick, why not live in the Pequod (named for the ship)...this whimsical beauty measures 26' long and weighs 11,500 pounds!  Wouldn't you do a double take when passing this on the highway?! 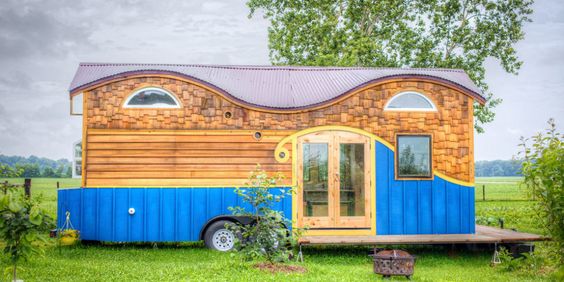 I have only touched on the high points of Tiny Houses, their construction and their uses...but one of my favorite food-for-the-soul stories comes from Seattle, where the non-profit Low Income Housing Institute is experimenting with building Tiny Houses for the homeless; they have put 14 of these safe and warm abodes on a city lot that used to hold one single famly home. Aaron Long, a communication specialist for the group said they can build a tiny house for about 2000.....and may be a viable alternative to low-income apartments, and certainly to tent cities they've tried to help in.  Click here to read more about this project.

So, has this research succeeded in changing my own mind about living in a Tiny House?  No, not yet; I still prefer room to stretch out...but without a doubt I have gained new respect for the movement, and all the people involved, from the ingenious builders to the adventurous souls willing to pare their lives down to the bare essentials, and to the civic leaders facing the regulatory ins and outs head-on to find ways to cooperate. 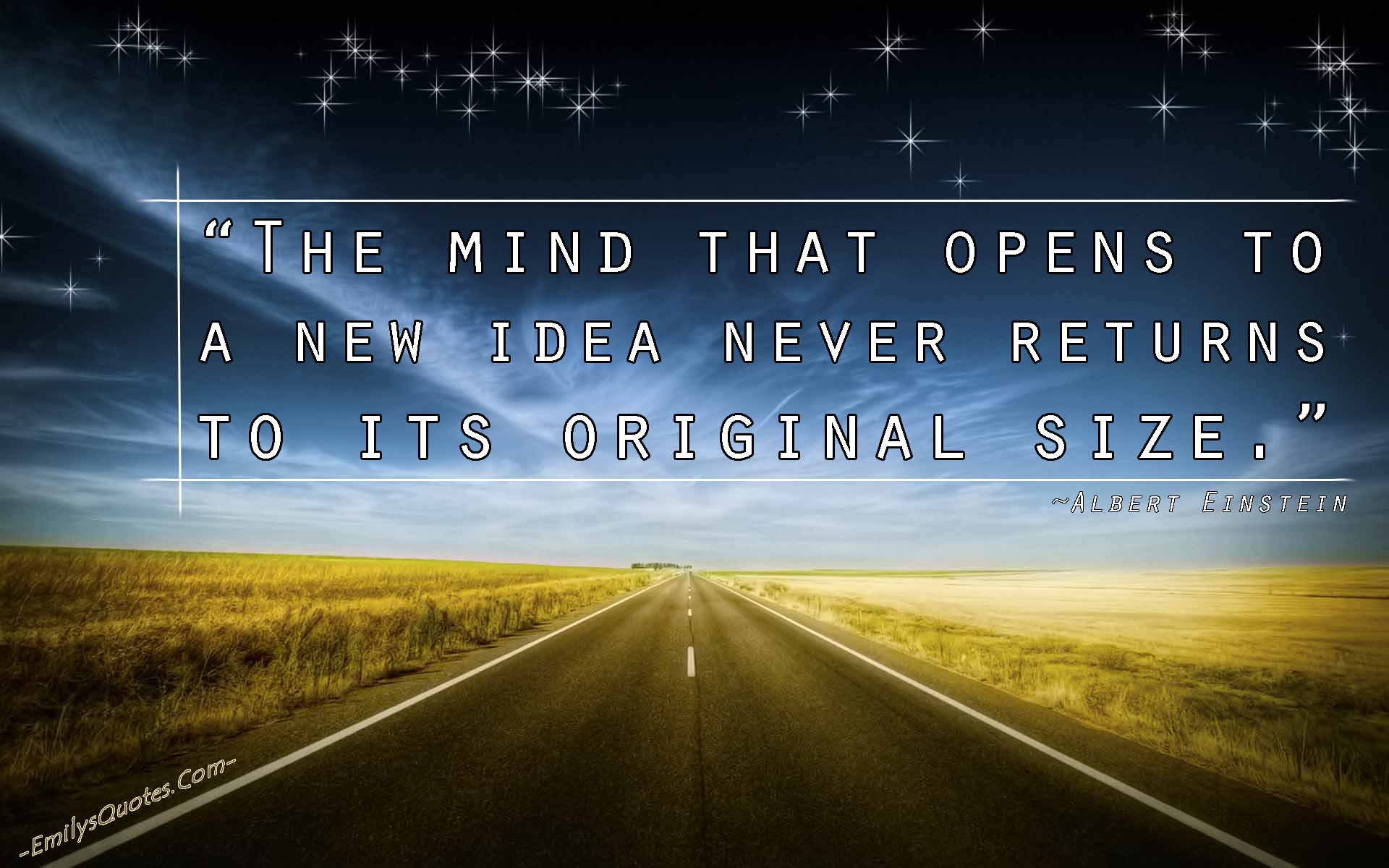 Innovation in all things must be embraced!  I'll try not to hide from new ideas in the future, and I will now pay attention to this little thing called the Tiny House Movement...I hope you will too!